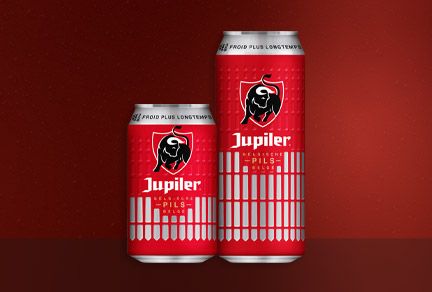 The challenge of replicating the distinctive flutes of Jupiler’s glassware in an embossed can has led to tooling innovations that enable Ardagh Group to render embossed designs with greater definition, creating new branding opportunities for its customers. Ardagh, a leader in the embossed can market, first created an embossed design for the Jupiler brand in 2014, producing 33cl and 50cl cans that were debossed on their lower halves. The success with which these cans echoed the glassware’s characteristic ribbing, which is a key part of the brand’s identity in the Benelux countries, was reflected both in Jupiler’s sales and its invitation to update the design for 2019.

The latest version features debossed flutes that not only mirror the design of the Jupiler glassware more closely but also provide a functional benefit: research produced by AB Inbev (ABI) in collaboration with Diabatix, a Belgian company that specialises in generative thermal design, showed that, by reducing the surface area in contact with the drinker’s hand, the recessed relief of the full-length flutes lowers heat transfer, and so keeps the beer colder for longer.

However, as Product Application Manager of Ardagh Group’s European Metal division, John Reed, said, “Pressing a design into a can wall just 0.1mm thick, has to be done judiciously, and in the right areas. There’s no handbook for this,” he explained, “just the experience gained over the last 15 years of using [embossing] technology.” A critical aspect of this technology is that the larger the area to be embossed, the shallower and less well defined the impression created by the tooling – which made the length and depth of the flutes in the new Jupiler design a considerable challenge.

A partial solution was provided by dividing the flutes into short sections, but to achieve the required depth of debossing, “we went back to the drawing board,” John explained and to Ardagh’s tooling supplier, “to change the way the embossing tooling is cut.” The result, was tooling capable of combining both definition and depth to create a debossed can whose detail references the Jupiler fluted glass more closely and satisfies ABI’s colder-for-longer concept.

The finishing touch, meanwhile, lies in the design’s sparing use of colour. Rather than being printed with a solid red as first intended, the Jupiler cans exploit the highlights and reflections of their bare, embossed aluminium to create a premium feel and a striking appearance that stands out among retail shelves.

The fact that Jupiler chose to continue investing in embossed packaging for its Benelux market, is a measure of a renewal of interest in the technology. “The embossing market had been dormant for the past couple of years, but it's back in vogue again, especially among brewers,” John explained. “Brewers are looking to create a premium brand for their beers. The production innovation which resulted from the Jupiler project has wider benefits as it gives us the opportunity to take a fresh look at embossing and allows us to create more complicated designs while still achieving strong stand-out.”

Ardagh Group (“Ardagh”) welcomes the award to it today of $84 million, including interest and costs, by the ICC International Court of Arbitration. This award arose from an adverse jury ...

Our website uses cookies to improve our service, perform analytics, personalise advertising, measure advertising performance and remember user preferences. Select “Accept all” to agree or "Manage preferences" to select which cookies you wish to deploy.